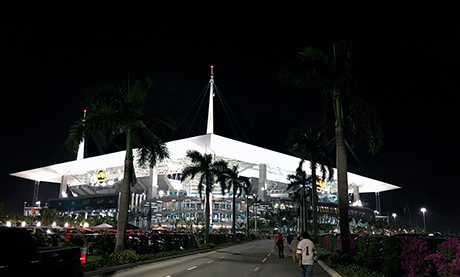 Arquitectonica collaborated on the design of the redevelopment of the Miami Dolphins stadium. The firm’s work included a new master plan of the stadium and surrounding areas as well as the architectural design of the new roof for the stadium itself, and future stadium upgrades. The master plan called for the conversion of existing parking areas to green parks, the reconfiguration of the main entry drive at Gate 2 which will now be known as Shula Drive, the addition of an exterior amphitheater, and the coordination of a new Dolphin-themed water park into the plan. New parking area convenience stations, as well as new lighting and new signage were also included.

The new 622,000 SF suspension roof is composed of steel and cable and is designed to cover the seated areas of the stadium and protect spectators from the sun and rain. Also included in the project is 35,000 SF of new office space for Miami Dolphins employees, and new concessions and bars for 200 and 300 level suites and club ticket holders at Gate E. Arquitectonica also renovated select NFL Owner Suites to update technology.