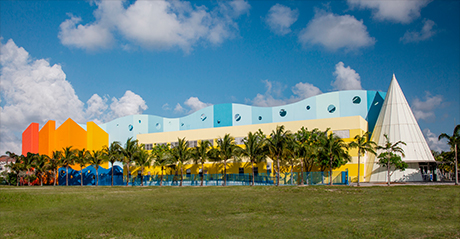 A 61,000 SF museum and grounds including an auditorium, a library, a cafeteria, and classrooms, designed with children in mind. The forms represent the four elements (which are found in many fairy tales): earth, wind, water and fire. The earth building is the color of the “planet earth” and has a secret face hidden within the facade.

The water building has a wave-shaped wall and is colored blue. The wind building is light gray violet and has a winding ramp which circumnavigates it. The fire building is orange and has a jagged skyline. The sum of the parts is a space where the children can actively respond to and be engaged by their environment.